Created, proposed and finalized several courses for CUNY, including a

lessons in NYC for summers only after March 2011)

Currently teaching Jazz theory and Guitar lessons to students in Japan via Skype. 2010 to present

In addition to a strong professional performance, theoretical and

that can be utilized to play over changes,

This can greatly increase the student's writing and soloing, and help to develop an musical identity. His teaching resume is available upon request.

Knowledgeable in utilizing the latest and most sophisticated guitar effects,

hardware and software, Music recording and sound design software such as Ableton Live (all versions),

65GB of drum and sound samples for creating beats.

*STRICK-9 "From the Fire" Independent release 2003

Arnold skills as a guitarist are extraordinary.

Arnold is known for his cutting edge style and has been referred to as a "Hendrix Blood Ulmer Funk Vibe with Bebop lines". ​ 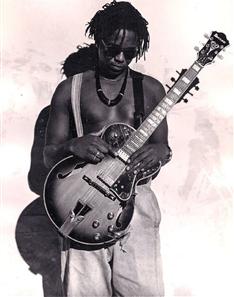 Arnold began his New York career by being grabbed by one of the greatest drummers in Jazz history, Beaver Harris, one of the true father's of Avant Garde drums. Beaver joined the Arnold Strickland Trio and they began to work the NYC Jazz scene. 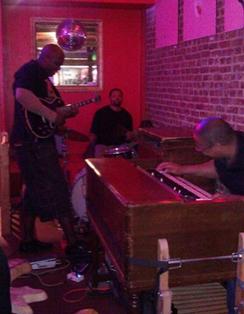 As he emerges on the World wide Jazz scene as evident with his just released interview with Hybrid Jazz with Trish Hennessy or his interview with the Italian Blog/Magazine “FreeFall Jazz, or his interview with Jazz Inside magazine, or his collaborations with musicians here and abroad, Guitarist Arnold Strickland is making a name for himself as a force to be reckoned with! If you havent heard of him, Arnold Strickland is a Progressive Jazz Guitarist based in New York City. Known for his progressive, aggressive, cutting edge style and ability to uniquely perform and mix in his way, different genres, from post BeBop to HipHop in his own music.

Arnold is native of St Louis got his first guitar at the age of 6. His early influences were Jimi Hendrix, Keith Jarrett and John Coltrane. Arnold attended St Louis Conservatory of Classical Music where he

After 3 years at St Louis Conservatory, Arnold was accepted to study at the prestigious Berklee College of Music in Boston. There, Arnold met musicians from every corner of the Planet, and had access to the most advanced concepts of

Arnold was also chosen as the house guitarist for the world famous Bluenote Jazz Club in NYC, where he beat out all the competition and was honored to play with the absolute, best in Jazz and share the same stage with Herbie Hancock, John Scofield, BB King, Philly Joe Jones and many others. The house band also featured "young lions" and Jazz stars Cody and Charnet Moffett, Kenji Hino and Kenny Drew Jr.

During his second year at Berklee, Arnold got the chance to play with Ramsey Lewis. This World renowned musician gave him insight and direction. While at Berklee, Arnold continued to tour and gig with his college peers like Roy Hargrove and Delfeyo Marsalis.

After his 4 year stay at Berklee, Arnold moved to New York City to pursue his musical career. ​

A few performance and Tour Highlights

performance hear around the world!

Arnold performs at "Summer Stage" in the meadow of NYC's Central Park with the headline group "Nu Afrika Project" that features the actor/singer "Leon" and Grammy winner Num Amen Ra, for an estimated 60,000 people!

Arnold performed his cutting edge style of guitar based computer loop/sample music in collaboration with one of Italy's most famous Hip Hop DJ's, Fabio Marzo as part of their well received European Hip Hop tour!

Arnold recorded with Grammy winning Reggae Artist, Burning Spear and is featured on the upcoming 2006 re-release of Spear's classic "Columbus".

Arnold recorded at Clive Davis Studio in NYC with members of Wu Tang Clan, Rhonda Ross and Producer, Jazz great Rodney Kendricks on a soon to be released CD!

over the airwaves, The Dipolmats aka Dip Set,

Besides being one of jazz music's piano greats

with 6 major label releases under his belt,

Guitarist for “The Devils Playground”, an

to present. Released 2 CDs and 3 Videos. Music and videos http://www.reverbnation.com/thedevilsplayground

on Drum and the renowned Richie Goods on

Summer 2012, the only Jazz Artist (Arnold Strickland Trio) to perform at the Electronic music festival, "The Return to the Bubble Kingdom", the biggest music festival of that year in NYC with thousands of people attending!

The Arnold Strickland Band will be performing for the 2013/2014 International Jazz Festival Jazz Caltagirone, in Sicily Italy! Spring 2014!